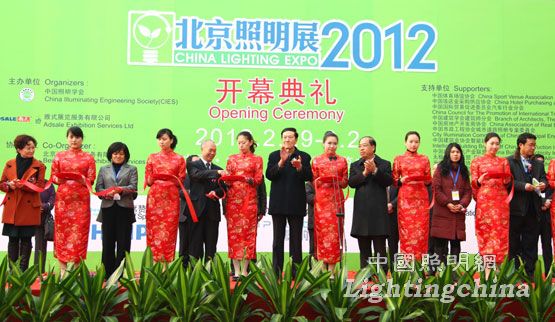 On February 29, 2012, the annual Beijing Lighting Fair opened on schedule. With the full support of the China Illuminating Society, this exhibition is developing vigorously and positively, gradually showing a flourishing trend.

Mr. Wang Jinzhao, Chairman of the China Illuminating Society, Ms. Xu Huai, Executive Vice Chairman and Secretary-General attended the opening ceremony of the exhibition. Mr. Zhu Yulun, Chairman of Adsale Exhibition Service Co., Ltd., stated at the opening ceremony that this year's exhibition was 50% more than last year's scale, the exhibition scale was 30,000 square meters, and 200 exhibitors were brought together. It is expected to attract 25,000 visitors.

Compared with the past, as long as there are several major features of the current exhibition, one by one summed up to write a total readership:

Watch one: The conference forum has many activities. The Beijing Lighting Fair was the most frequent event in the Forum since the previous exhibition. It not only followed the forum organized by Philips last year and was exclusively sponsored by the â€œLight â€§DESIGNâ€§ poly â€ forum, but it was also held for several days, and it continued throughout the exhibition. At the same time, the China Lighting Forum sponsored by the China Illuminating Society was also held at the Royal Hotel during the same period. In addition to the Lighting Energy Saving Products Public Procurement Summit and the 2012 Lighting Engineering Design Case Forum, three more lighting marketing training courses were also added to cultivate dealer buyers. Opened around the clock, the theme of the conference included lighting design, national policies, procurement, and distributors. From the large-scale development of these types of activities, it is not difficult to see that Beijing Lighting Exhibition is trying to cultivate its own buyer group, including designers, buyers, distributors and agents.

Aspect 2: There are many famous enterprises. Philips, Thorn, Qinshang Optoelectronics, Foshan Lighting, Yaming Lighting and other large companies appeared one by one, and all are large-scale special booths, quite style. Beijing Lighting Fair is located in Beijing, the capital city of China. Beijing is a political, economic and cultural center. It has excellent geographical advantages. Most of the exhibitors are large-scale brand enterprises, and small enterprises are fewer. Because large-brand enterprises value the relationship with the government more, the connection with Beijing will naturally not make any effort, otherwise the country's large-scale engineering projects come from. The small business is more pleasing to the actual effect, fancy the immediate benefit recovery, called a small boss to participate in the exhibition, his first sentence must be asked the show salesman; orders, orders! If he can't see immediate short-term benefits, he definitely won't have to pay more for the participation fee.

Aspect 3: Deeply affect the northern market. Beijing Lighting Fair is located in the north, and has a far-reaching impact on the lighting fixture market in northern China. It is an important undertaking point and exchange platform for the lighting industry in northern China. Visitors to the show also came from people in the north, such as the company's northern company, the North Office, etc. Some business owners who pay attention to the designers also come personally. Of course, this can be said to be its characteristics, in fact, it is also its shortcomings and limitations, but in the past year or two, Beijing Lighting Exhibition has gradually presented the national development trend.

Aspect 4: The details are handled properly. See the details in the three sheets. The 29th is the first day of development. Compared to last yearâ€™s relatively deserted situation, this yearâ€™s situation looks really good. Mr. Huang Jinlu, General Manager of Jiangsu Yangzi Electrical Machinery, told reporters: From 9 am this morning to the present, many viewers are interested in our products. Many of them are foreign audiences. This is the first time we have exhibited this year. I think it is still good. The reporter saw two black-and-white forms on the booth of Yangzi Electromechanical Co., Ltd. The original one was a delegation of more than 30 design institutes from the north, and the specific number of visitors was written in detail. The reporter asked Huang Zong: "Did these delegations really come?" He said: "Today there are quite a few." The second form is the contact information for dining restaurants near the Beijing Exhibition Center. Each has a telephone number. A total of more than 30, this reflects the details of the service for exhibitors.

The third form is a table of lighting marketing training courses on the site, which lists the names of companies that need to recruit dealers.

Aspect Five: In the incubation phase. During the exhibition, Mr. Wang Meng, Chief Electrical Engineer of Beijing Architectural Design and Research Institute, talked about the view of this exhibition: Beijing Lighting Exhibition will display more products to designers rather than the exhibition in the south. Tend to be commercial.

"This year's Beijing Lighting Fair is much better than last year's, including the scale and popularity of the exhibition, but it is still in a nurturing phase and it is still at a rising trend. It should be better in a few years." As the gold of the show Mr. Lu Weidong, general manager of the Austrian sponsor of the company, told reporters.

Year-old flowers are similar to each other, and their annual and annual exhibitions are different. We can see that thick plots will be thin and we will see this year's Beijing Lighting Fair as an ever-expanding work. There will be progress and forwards. One day it will explode. We believe that with the support of the China Illuminating Society and with the support of China Lighting Network, we look forward to bringing more surprises to us at the 2013 Beijing Lighting Fair.