Electric light source lighting has become an indispensable part of human life. At night, the artificial light changes the law of human beings, and it also inevitably affects the natural ecological environment that coexists with us, especially the migratory migratory birds that rely on the natural day and night environment. The nighttime living environment of migratory birds has become increasingly serious in China, where the rapid development of lighting has become more and more serious. The social attention of domestic bird ecological diversity and the nighttime living environment of bird species is also increasing; lighting advocates green, environmental protection and ecologicalization today. Protecting the habitat of birds and the nighttime light environment during migration is also an important research direction.

In this paper, the research on the light ecology of migratory birds in foreign countries is carried out in recent years, and on this basis, the experimental observation and study of birds affected by illumination is carried out, and the influence weights of different light colors, illumination, brightness and spectrum are analyzed. .

Migratory birds are birds that migrate long distances between breeding grounds and wintering grounds along a relatively fixed route in the spring and autumn. Migratory birds have great value in economic, ecological, social and aesthetic fields, and are important research populations in international ecological environmental protection and ecological diversity research.

Foreign studies on the influence of artificial light on migratory birds began in 1912 when the lighthouses in the Nordic waters induced an abnormal accumulation of migratory birds. Numerous studies have shown that artificial illumination at night can not only interfere with the normal rest of the birds in the habitat, mislead their judgment on the season and the timing of migration, but also seriously interfere with the judgment of direction and obstacles during the night migration flight.

Unlike mammals, there are four kinds of cone-shaped photoreceptors in the eyeballs of birds. They are heavily dependent on the weak natural light environment at night. They are sensitive to visible light and ultraviolet light at wavelengths of 300 to 400 nm, and the migration of ultraviolet rays to birds. Physiological behaviors such as discrimination, searching for food, courtship, etc. have an important influence. Most birds' feathers can reflect ultraviolet rays. Some observational studies have also shown that red light has a relatively strong influence on migratory birds in the visible range.

In the field of ecological lighting research based on migratory bird protection in foreign countries, the Longhorn Lighthouse in Ontario, Canada, implements automatic control. By improving the light intensity and beam angle, it can reduce the number of migratory birds that hit the lighthouse during the migration season to a certain extent. In response to the problem of nighttime high-power lighting threats from offshore oil and gas exploration bases for migratory birds in the North Sea of â€‹â€‹Europe, a new type of low-red eco-light source was developed. In the developed cities such as Manhattan, New York, and Toronto, Canada, urban lighting measures for migratory birds have begun to reduce the disturbance of migratory birds' night migration.

2. 2 Importance of research on the effects of domestic migratory birds 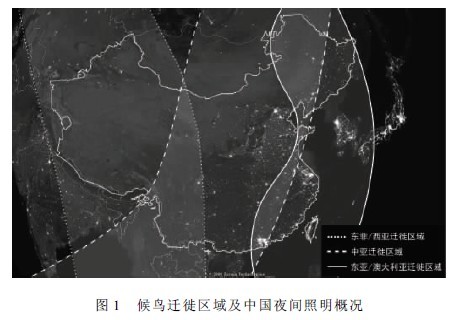 The study of lighting affecting migratory birds at night is a new, forward-looking and regionally interdisciplinary research topic. In the development of China's lighting towards green, environmental protection and ecological, whether it is urban lighting planning, architectural landscape lighting design, or night lighting of ecological garden parks, it is necessary to consider the protection of night vision of migratory birds and other wild species. However, relevant research in the field of domestic lighting is still in its infancy, and the development of eco-lighting still requires a lot of experimental and research support.

3 Experimental study on the effects of different illumination on songbirds

In this experiment, direct irradiation and observation of species response were carried out. In the laboratory environment, different typical outdoor lighting sources were used to compare the effects of illumination on specific species of birds, and different light colors, illuminance, brightness, spectrum, and The degree of influence of the amount of illumination parameters such as the flicker frequency on the birds at night.

The LED, metal halide lamp, high-pressure sodium lamp, tungsten halogen lamp and other typical light sources are used, and the color filter, illuminance and brightness are adjusted by the color filter and the visor. The detailed measurement values â€‹â€‹of the experimental light source are shown in Table 1, Figure 2 to Figure 5. Shown. The effect of flashing illumination was measured using an LED light source. 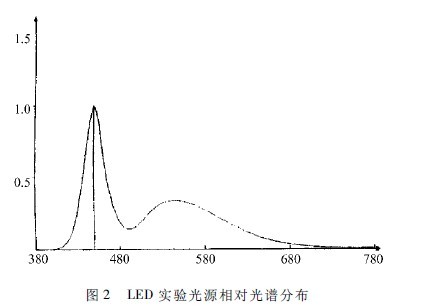 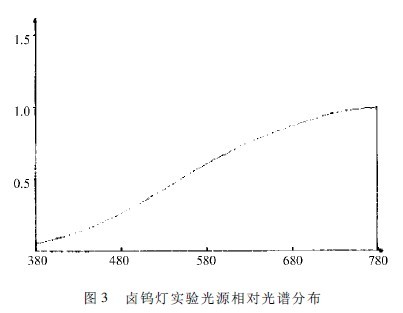 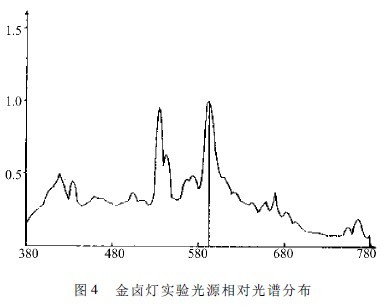 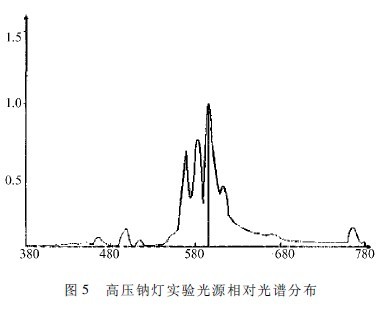 The species of migratory birds in the world are extremely rich, but the differences between different birds are far less than those of mammals, and the visual characteristics of the same species are very similar. Among the migratory birds that migrated at night, songbirds accounted for the vast majority; and in the indoor environment, wild migratory birds were extremely vulnerable due to changes in the overall environment and could not be good experimental observation objects. In order to ensure that the behavioral changes of experimental birds are caused by light stimulation, the following songbird cage birds are selected as experimental subjects:

Grey-winged bird: One of the main caged songbirds in the order of the bird, the passerine includes more than half of the existing birds, most of which are migratory birds that migrate at night;

Budgerigar: One of the main caged songbirds in the parrots. The wild population is a national second-class protected animal with migratory behavior.

The experiment was carried out in an indoor constant temperature environment (15 Â± 5 Â°C). See Figure 6. Using a comparative observation method, four bird cages (two birds of the same species per cage) were divided into two groups: The test group was dark all day. (Indoor natural light level illumination < 1lx) The artificial light is directly applied for 40 to 60 minutes in the time period; the comparison group maintains a natural black state during this period. The two groups of bird cages were separated by a low reflectance black baffle and protected from other light or artifacts during the experiment. 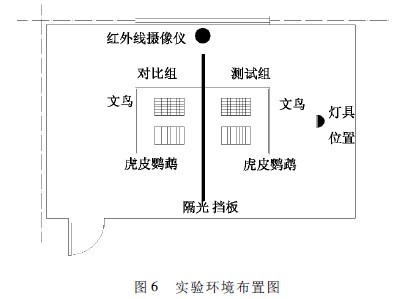 Different lamps and light sources were selected, and the illumination and brightness were adjusted by controlling the irradiation distance and the translucent light-shielding paper, and the irradiation test of the test group birds and bird cage environment was carried out in groups. Experiments were conducted every night for two nights for each artificial light experiment. Using the infrared night camera to automatically record the behavior of all birds in the unmanned state is shown in Figure 7. 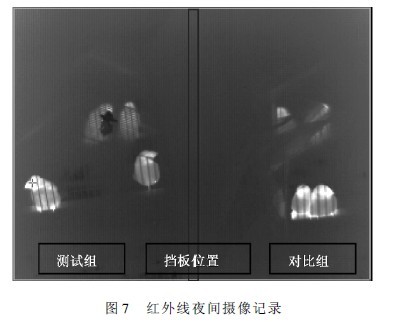 In the data collation, the video was recorded and played back frame by frame, and the different responses of the test group and the comparison group were observed. The observation method of the behavioral response of birds in the bird ecology and the behavioral spectrum were drawn from the bird ecology. The frequency of various abnormal behaviors of birds in the test group under light stimulation was recorded (Table 2). Finally, the artificial illumination variables (illuminance, brightness, light color, flicker frequency) are integrated with the bird behavioral frequency.